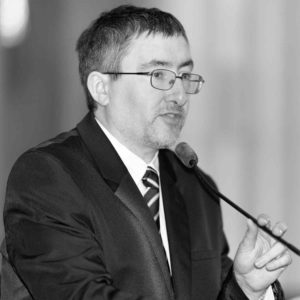 Philippe Bezkorowajny was born in Bordeaux, France, in 1972. He started learning music with piano at the Cenon school of music and the Bordeaux Conservatoire. He later studied organ with Michel Reverdy (titular organist of the Dom Bedos organ at the medieval Abbey of Sainte-Croix in Bordeaux until his death in 2006). He holds a master’s degree in Musicology and a postgraduate Performance Arts diploma from the University of Bordeaux.

Philippe has been the titular organist of Sainte-Marie de la Bastide in Bordeaux since 1999. He was additionally appointed alternate titular of the historic organ of the Abbey of Sainte-Croix in 2007, after assuming alone the interim of the position for over a year. Since 2016, he is also titular organist at the Saint-Romain church of Cenon and alternate titular at Saint-Pierre of Bordeaux.

A leading musical figure in South West France, Philippe created in 1999 the Association pour le Développement de l’Orgue en Aquitaine (A.D.O.R.A.), of which he is currently president. He is also the director of the Théâtre des Deux Rivières theater and was at the head of the Association des Amis de l’Orgue d’Arcachon from 2015 to 2018. He authored two books, on “Nineteenth Century Organ Builders” and “The Organs of Bordeaux”, published in 2003 and 2018. He has been teaching piano, organ and harmony at the Coutras music school since 2001.